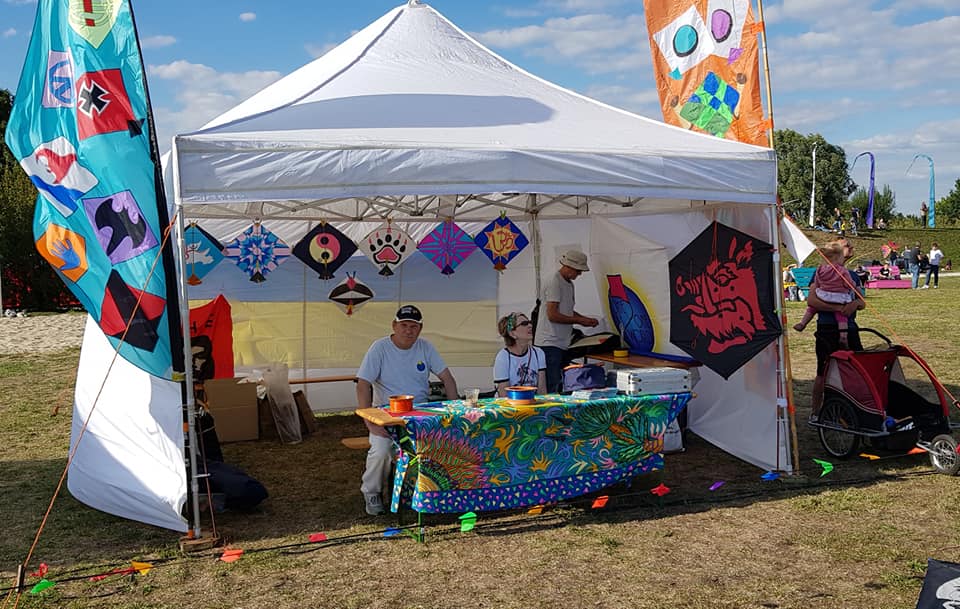 For the first time, OneSkyOneWorld.eu informed about its activities, which are not only held once a year on the 2nd Sunday in October, as many think, but are operated all year round.

The current occasion was certainly the 33rd kite festival in Potsdam 2022, which took place on September 3rd and 4th. Of course 5 big OSOW-Rokkakus and solidarity kites with Ukrainian flags were part of the demonstration program. During the rest of the time they were used as decoration and ornamental elements in the pavilions provided by Volkspark Potsdam..

Posters with colored logo and translation of the original text in 6 European languages were available free of charge. DIN A 6 sized handouts reminding about the international OSOW Day and the planned local activities on October 9, 2022 at Tempelhofer Flugfeld in Berlin (THF for short) were also distributed free of charge.

Finally, another reason was the presentation of the solidarity T-shirt for Ukraine, which was available at the kite stand of Flying Colors. All members of the OSOW team, the THF Kitefighters and the neighboring tent wore the shirt in the appropriate size (S, M, L, XL and XXL).

To get some visual impressions, here are some pictures published.