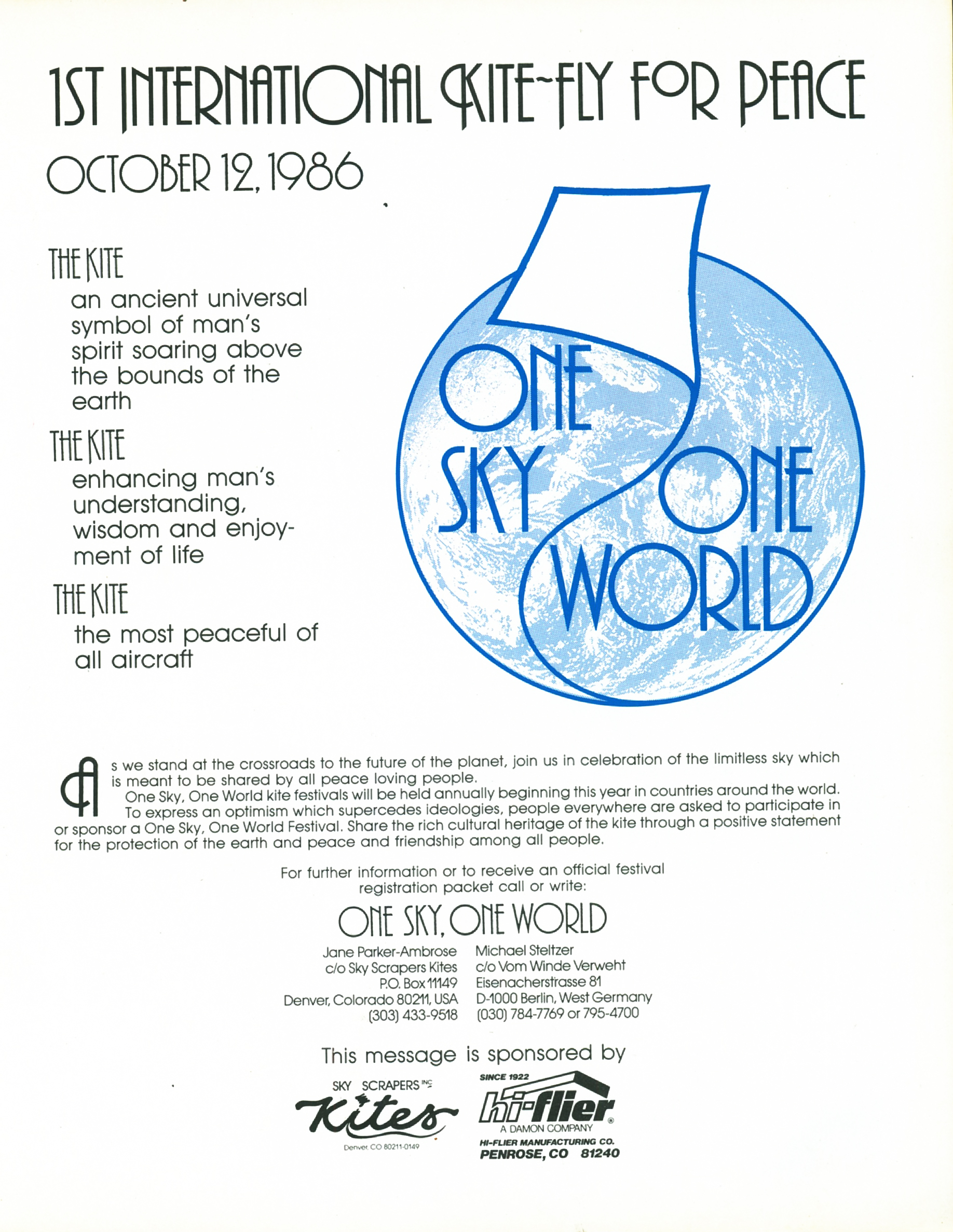 One Sky, One World

KITE DESIGNER Jane Parker-Ambrose (Sky Scrapers Kites) of Denver, CO has accomplished Will Yolen’s dream of using kites to make friends in Russia.
Proving the adage that luck is the residue of hard work, Jane traveled with a tour group to the Soviet Union last October. In Moscow, Jane president of the Soviet Woman’s Peace Committee.
It was the culmination of Jane’s long efforts that began when she had the idea, then made the kite, a three-foot nylon and satin diamond featuring the American and Soviet flags on each side of the globe unter a streaking Halley’s comet. The kite was accompanied by a friendship letter signed by about 200 U. S. kiters.
Before going to Russia, Jane made countless efforts to secure permission to fly the kite there, but never obtained official approval. She decided to take the kite anyway, and stowed it in a tube that a traveling companion said looked like a shotgun case. It make it through all the passport and baggage checkpoints with nary a hitch. But on the appointed day for flying, the wind was too light. Jane left the kite behind for flying later. It was photographed and printed on the cover of the July issue of Soviet Life, the attractive English-language magazine produced for American consumption.
Back in the U. S., Jane found the kite had become the start of something big. It was the stimulus for idea of a international kite fly for peace, „to promote the concept of global harmony between all people through an expression of the universality of kites and the wind,“ as Jane’s press release puts it. „Through the sharing of the wind on the one day the world will be moved toward the discovery of a state of peace. The great air ocean is the home in which all o life on earth exists and the kite will be an important symbol of the need to protect and nurture it.“

The event is called One Sky, One World. The date is October 12, 1986, the first of what Jane believes will be an annual event. She has even gone so far as to set up a nonprofit organization to support the fly and to separate herself as a kite business-person from her charitable cause. Response from many kite flies has been enthusiastic. Michael Steltzer of West Germany is active in coordinating ideas in Europe. Istvan Bodoczky of Hungary suggested that „we all exchange kite banners (30x250cm approx., or 1x8ft) with peace written on it in our own languages.“ A song has been written especially for fly and a photographic and video record is being coordinated.Tireless Jane is also seeking United Nations endorsement as well as their support for a commemorative postage stamp. Kiters planning to fly on October 12 should write: One Sky, One World, P. O. Box 11149, Denver, CO 80211. – V. G.