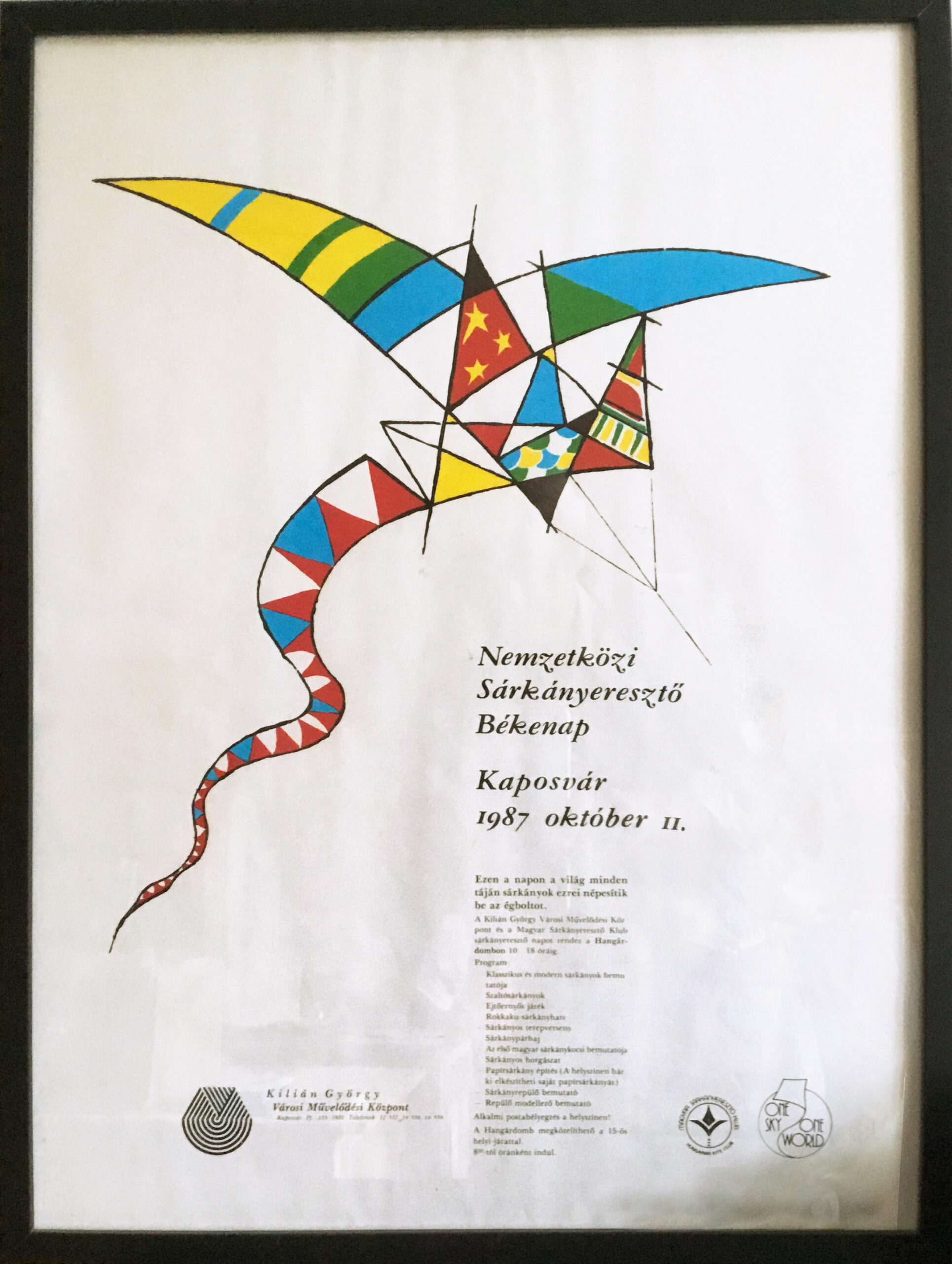 „Everybody saw that it was possible to do it and that we actually had to do it,“ said Guido GuidareIli and Mauro Gambaccini for Gruppo Vulandra, a kite club in Ferrara, Italy.
What the group did was raise a kite and banner marked with hundreds of peace messages and signatures over the town of Sumy, near Kiev in the Soviet Union. The day, October 12, 1987 was marked by light winds, sunny skies, short speeches and large crowds.
It was a first in the USSR and perhaps the most unusual of the kite flys in scores of locations that were observing One Sky, One World that day.
From Hungary, a postcard stamped with an official postage cancellation carried the OSOW logo from the city of Kaposvár to the rest of the world.
EIsewhere, kitefliers turned out at doubIe the leveI of the 1986 event. Near Auckland, New Zealand, 3.000 people attended; in Seattle, Washington, 1.800 kites were counted in the sky. One Sky, One World had clearly estabIished it self as an ongoing international ralIy.
Luckily, founder Jane Parker-Ambrose had not yet dropped from exhaustion and on March 12, 1988 in Redondo Beach, California, the first organizational meeting of nine people was held. The occasion brought forth the naming of an initial board of directors, the adoption of an official statement of purpose, and a good deal of brainstorming.
Reports since the meeting show that progress is being made in several areas. For example, nonprofit status has been applied for and Hi-Flier Manufacturing Co. is continuing as a sponsor and maker of official kites. Additional corporate sponsorship is being sought and a prepackaged festival kit is being prepared. Jane continues to deposit all donations in the OSOW account. She and her husband Larry have been paying for expenses until nonprofit status is obtained and the board of directors approves all expenditures.
The latest news is that on April 23, 1988, Jane was recognized with a special award by the Chamber of Commerce of the City of Ferrara, Italy. She received an etched bronze plaque in a ceremony attended by 500 people. She traveled as a guest of the cities of Ferrara and Castiglione del Lago, where she participated in their kite fesivals. – V.G.